Alicante, Thursday April 16, 2020.- The facilities of the former Ciudad de la Luz complex in Alicante, which currently houses the main headquarters of the Comuniad Valenciana Digital District, have become in recent weeks space for the storage of the Fallas material that was accumulated in the workshops of artists in Alicante affected by the postponement of the festivals due to the coronavirus crisis.

Last March, the president of the Valencian Generalitat, Ximo Puig, made available to the Alicante Hogueras Artists Guild the warehouse space existing in the old film complex to store the pieces built for Fallas.

The artists’ collective accepted this offer and has begun to gradually move the material accumulated in their workshops, in order to free up work space and be able to undertake the construction of the Hogueras de Sant Joan 2020, whose celebration is scheduled for the first week of month of September. 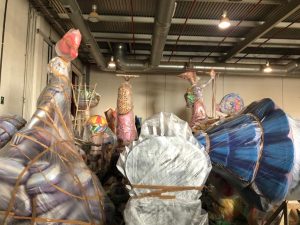 Antonio Rodes, general director of the Thematic Projects Society of the Valencian Community (SPTCV), an agency under the Department of Innovation, Universities, Science and Digital Society led by Carolina Pascual, has expressed his satisfaction at being able to provide “a fundamental service for artists can continue working ”.

In addition, – he pointed out – “we are excited because together we are doing the confinement and together we will do the lack of confinement, what is called de-escalation”.

“I think it is a message of hope and illusion because the figures, the icons, the Hogueras and we will go out together and we will be delighted to have and be able to celebrate in a great burst of party, imagination and a playful atmosphere, the overcoming of this nightmare that we are living and from which we will certainly come out with strength and all together ”.