Comunitat Valenciana Digital District host almost 250 linked companies, among the 80 based-in companies in the innovation hub, the 100 partner companies and the 65 collaborating institutions and entities that have already joined the technological ecosystem.

The diversity of sectors, origin and specialization of the companies has placed Digital District in the crosshairs of international and multinational entities.

Main sectors of the tech companies in Digital District

Among the companies linked to the innovation hub, 54% carry out an activity related to software and multiplatforms, Big Data, Smart Data or Business Intelligence and the technology industry applied to finance, the market real estate, education and tourism. 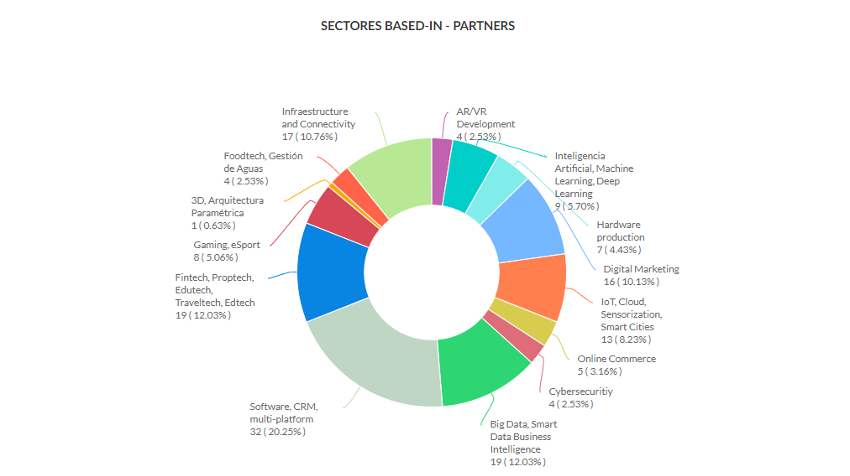 These sectors are followed in number by companies dedicated to infrastructures related to connectivity –which add up to 10.7%-, and digital marketing, with a similar percentage.

Online commerce, Artificial Intelligence, smart cities or the universe of gaming and eSports complement the business profiles that are part of the hub. These sectors are also the ones that have experienced the greatest growth since the beginning of the pandemic.

Four out of every ten companies settled in Digital District are international. Finland is the main country of origin, with 29% of the companies that have decided to establish their headquarters in the hub. The rest come from the United States, United Kingdom, Russia, France, Germany and Mexico.

The technology hub continues to consolidate its position in northern Europe, at the same time that the attention has been doubled from the two major Spanish technology hubs: Madrid and Barcelona. Companies that seek decentralization of their headquarters and an environment with a higher quality of life, focus their attention even more in these times on the Region of Valencia.

Tech companies have been able to recover more quickly from the first adverse effects of the coronavirus. According to the general director of the Sociedad de Proyectos Temáticos de la Comunidad Valenciana, Antonio Rodes, the competitive advantage of this type of company is unquestionable in uncertain scenarios such as the current one. In fact, many of these companies routinely use technological tools that allow teleworking and telematic meetings that other companies have had to incorporate forced by confinement.

Among the future projects of Digital District, those that are being developed for the European recovery plan that will allow the Digital District to leave its territorial scope stand out. The aim is to support the entire Valencian business ecosystem and some sectors such as health, climate change or tourism that are in need of innovation.